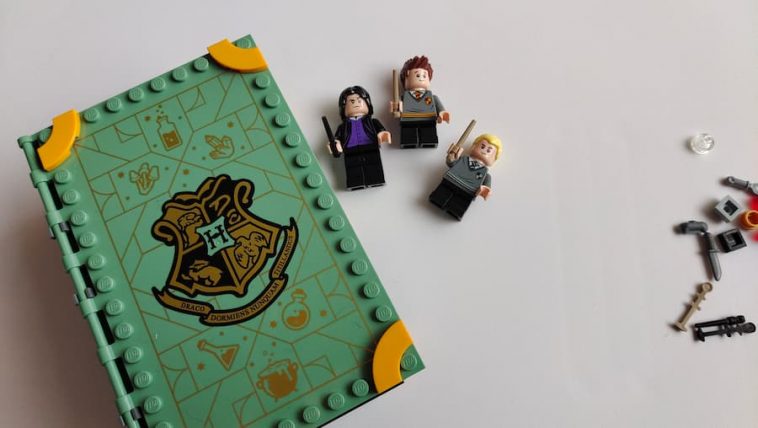 As part of LEGO’s huge January drop, we saw four brand-new sets enter the Harry Potter theme. Called ‘Hogwarts Moments’, these four sets each create a scene from a Hogwarts class, and there’s one themed for each house. The best thing about the sets, though, is that they fold up into a book.

We’ve built the Slytherin-themed Potions Class set and, although it’s a little smaller than we expected, it’s full of wonderful detail.

Inside the box you’ll find two numbered bags, two large plates that make up the covers of the book, the instruction booklet and a sheet of stickers. There are three minifigures included within the bags.

The book covers are unlike anything we’ve seen before, and truly make the set stand out. And, thankfully, the gorgeous Hogwarts crest on the front of the book is actually printed (!). There are a number of stickers used to decorate the inside of the book, but we’re so pleased to find the front is printed.

The first bag of LEGO Harry Potter 76383: Hogwarts Moments Potions Class is concerned with putting together the cover of the book, and building a few standalone elements. You’ll build the spine of the book from scratch before attaching it to the two cover plates. There’s a few stickers to add here, and the start of what will make up the Potions classroom interior; the rest will come in bag two.

The loose elements include a shelving unit, a chair, a chalkboard and a table. Normally we’re not big fans of random little builds, but here, when they’re not in use, everything packs away inside the book. It’s very clever – more on that shortly.

The second bag is far more enjoyable to put together than the first: here, you’ll be building the interior of the Potions classroom, which attaches to the inside of the book. Very cleverly, it all folds in, concertina style, when the book is closed. There’s some sticker detailing, but there’s a lot of brick-built shelving units filled with potion bottles and whatnot. It looks very effective.

One thing to note here is that the instructions carefully detail how to pack away all of the extra items. That chair, shelving unit and table need to be put in a very particular place in order to fit inside the book. The designers have been ingenious to create items that fit together so well – but you may need to refer to the instructions every time you want to pack this away! It’s a bit like a game of Tetris.

It feels like LEGO Harry Potter 76383: Hogwarts Moments Potions Class has been very purposefully designed to be both play and display. When the book is open, and all elements are out, this is very much a playset through and through. The individual elements allow for a child to create their own scene, and the included minifigs allow for some creative roleplaying.

But when the book’s all packed away, it’s the perfect subtle display piece. It’s clearly not a regular book made out of paper, but it certainly wouldn’t look out of place on a bookshelf; especially if you have the full set of four Moments sets together.

The fact everything can be folded away so neatly is a huge plus for both players and displayers; if you’re anything like us, those fiddly little pieces end up getting lost or mixed up with other displays. We’d love to see more ingenuity like this in other play/display sets in the future.

Although initially we were a little surprised to find how small the book is (it’s 16 studs tall by 10 studs wide), there’s no denying that LEGO Harry Potter 76383: Hogwarts Moments Potions Class offers good value for money. Like a lot of LEGO’s newest sets, it really is innovative; we’ve seen book-shaped sets before in the form of the Disney storybook range, and of course the LEGO Ideas Pop-Up Book from a few years ago. But neither have been designed quite like these. Hopefully it’s an idea we see move across into other LEGO ranges, too.

For £27.99, the Hogwarts Moments sets make great budget-priced builds. Perhaps they’re more pricey than some in terms of piece-to-price ratio, but considering the unique covers, the innovative design and the three minifigures included, it’s hard to argue with the price point. 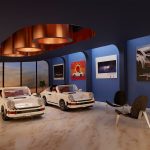 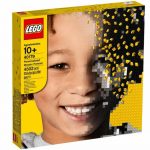