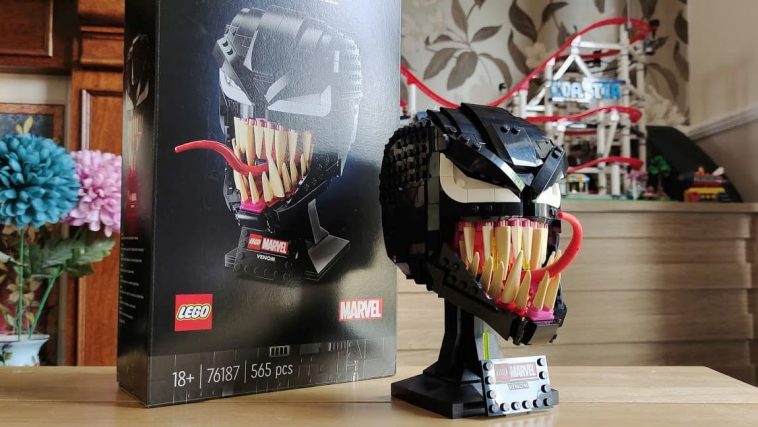 Started last year with a bevvy of iconic Star Wars helmets, the adult-focused LEGO busts series continues to expand. As well as more Star Wars helmets, Iron Man no longer finds himself the sole representation of Marvel – Spider-Man super villains Venom and Carnage can now be displayed by his side. Even DC has been brought in to the fold now, thanks to a replica of Batman’s cowl. Today we have a review of LEGO 76187 Venom, one of the most feared characters in the Marvel Universe. Is is a must-have for Marvels fans? Read on and find out.

In the box is a 88-page instruction manual and six bags. The bags are numbered 1-3 – i.e. there are two bags for each number. As usual, some of those bags include further bags containing the small parts. LEGO fans will be glad to hear that there are no stickers: every bit of detail on the model is created purely with bricks.

Starting with the two bags numbered “1”, you build the base before starting the core structure of Venom’s head. There’s nothing too exciting about this part, though you might be left wondering why you’ve placed some translucent yellow/green studs and a pole on the base. It falls into place eventually. Anyway, what you’re left with is a solid frame to expand upon.

It’s with the two bags numbered “2” that things start getting recognisable. In this stage you carry on building the head, and you start developing some interesting details. First, you build the back of the head in one large piece before being attached to the rest of the model. Then you do the top of the head. They’re both plain black, so there’s not much to admire other than the nice contouring of the bricks used. You finish with Venom’s eyes and upper teeth, the latter of which are layered quite nicely. Interestingly, Venom’s eyes are odd, and fit on via hinges.

With the two bags numbered “3”, you’re close to the finish. First you partially build Venom’s forehead, and attach it using two shields. You then finalise the forehead and attach eyebrows/lids. After that, the left and right hand side of Venom’s face are completed. Finishing Venom’s mouth comes after. You build the right part of the jaw, complete with teeth, then left. They’re joined together by a smaller piece with hinges at the front. Add in the tongue and put on the included plaque, and you’re done.

Being a model created with adults in mind, LEGO 76187 Venom is very much a display piece. There’s isn’t really any way you could play with it. In terms of functionality, all you can really do is twizzle his tongue around. So, display it is.

Like all of the LEGO busts releases so far, LEGO 76187 Venom is a great display piece, particularly for fans of Marvel, or more particularly, Spider-Man. It’s not a complex build, so there’s little frustration when putting it together. And once built, you have a model that’s nicer in the flesh than images would suggest.

Does it offer value for money? We’d say so. You’d perhaps pay more for a simple bust statue of this size – some 19cm high – yet here you also have the added joy of building it yourself. 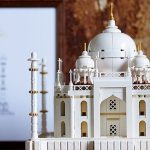 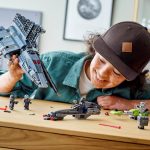