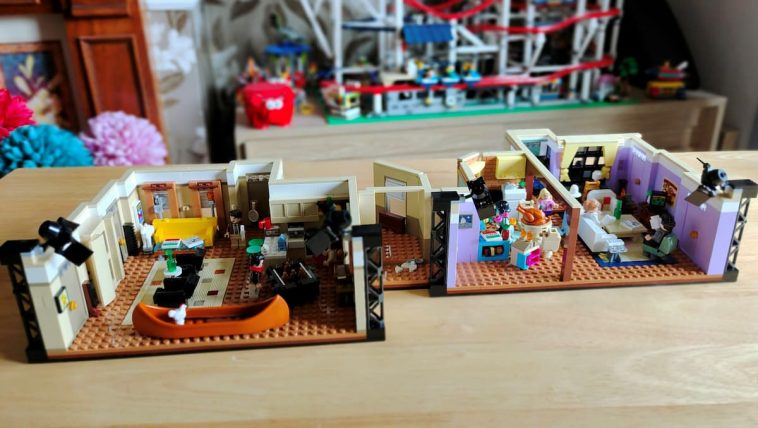 If you’re a Friends fan, LEGO’s latest set is guaranteed to put a smile on your face. Following up from 2019’s release of Central Perk, LEGO 10292 The Friends Apartments allows us to build Joey’s apartment and Monica’s apartment in the same studio style. It’s huge, and packs in a ridiculous amount of detail. Providing you’ve got the display space, this is a must-have for any Friends fan.

So no-one told you life was gonna be this way. Your job’s a joke, you’re broke, your love life’s DOA!

As you’d expect from a 2,048-piece set, the box of LEGO The Friends Apartment is large, and is jam-packed full of pieces. There are 15 sets of numbered bags here. Most numbers only have one bag, but a few have both a larger one and a smaller one. There’s also a small sticker sheet (mostly for the artwork that adorns both apartments), and a thick instruction book.

The instruction book is 290 pages, so it’s a whopper. The introductory pages provide a nice bit of detail about the set, the designer, and Friends in general. It makes it a nice memento for any fan of the series.

There’s also seven minifigures: Monica, Rachel, Phoebe, Joey, Ross, Chandler and Janice. (There’s also an extra ‘half’ minifigure in the form of Gladys, Phoebe’s ‘special’ 3D painting!) Each character sports an outfit that pertains to a particular episode over the 10 seasons. It means they’re not all from the same time period, which is a bit confusing if you want to recreate your own scenes, but it hardly matters. They all look great.

LEGO 10292 The Friends Apartments is an incredibly fun set to build. There isn’t much repetition, it’s packed with so many details, and the constant Friends easter eggs you’ll find make it a treasure trove of memories for any fan. But even if you’re not a huge Friends fan, the build is interesting and varied enough to keep your attention. Some really clever techniques are used – we’ll get to those shortly – and the finished result is something rather spectacular.

Since the set consists of two apartments, it’s an easy set to do in two halves, or to build with a friend or a partner. Both apartments are in the same instruction book, though, so if you were to do that, one of you will need to pull up the online version. Easy enough to do, though! Joey’s apartment is slightly smaller than Monica’s, and we feel that Monica’s has slightly more detail in. After all, this is the apartment that featured most in the show.

For both apartments, you’ll start out by building the base. Since they’re unusual shapes, you can’t simply use a standard LEGO base plate; you’ll build your own by layering together a variety of plates of different sizes. If you built Central Perk, this part will feel familiar, as that went together in a similar way. Also similarly to Central Perk, both apartments have a recess where a seating area will slot in, independently from the rest of the build.

Even when it comes to building the bases of the apartments, the designers have snuck a nod to the TV show in there – hidden between the layers of base plates are the Friends logo ‘dots’. I almost missed them – the coloured circles serve no other purpose!

Putting the bases together for both apartments is probably the most boring part of the build, but since you’re working with fairly big plates, it also means they’re pretty quick to put together. And once they’re done, you can start adding in detail, and here’s where the fun begins.

In Joey’s apartment, you’ll start by building the kitchen. That means a brick-built fridge, sink and cooker. There’s a great use of bricks to form the sink. Small window frames filled with opaque panels have been used to create the effect of kitchen cupboards. You can’t open them, obviously, but it’s a great effect. Following the kitchen, you’ll also build the iconic foosball table, and add the Magna-doodle to the back of the door. You’ve got three stickers to choose from here, so you can decide what it says. It’s a shame it’s not so easy to keep switching them around.

A very niche nod to an episode is in the large book you can see in the picture above – the ‘V’ encyclopedia that Joey bought from a travelling salesman!

From the kitchen in Joey’s apartment, you’ll continue building the walls around the edges. From the bathroom door, you’ll build two windows, then the bedroom doors. The final details come last: the sofa, TV unit, Pat the Dog (!) and the canoe. It’s a shame we don’t have Joey’s giant homemade entertainment unit, but it would be hard to do it justice with the space available. Of course, the Chick and the Duck also appear.

When it’s finished, Joey’s apartment looks fabulous, and is an excellent representation of the on-screen set. There’s plenty of room to manoeuvre your minifigures around while still packing in a lot of detail.

After Joey’s apartment, you’ll move onto building the small piece of hallway that joins the two apartments. There’s not much to talk about here; it’s a small floor panel with half a wall and window. There’s an Easter egg squeezed in here though – a cheesecake from Mama’s Little Bakery on the floor!

The corridor never fully attaches to either apartment – they simply slot together. It’s a good solution since the whole model together is LONG. Allowing them to be separated easy opens up more display options.

There’s a great use of brick-patterned pieces here, both inside and out of the apartment. The balcony is a great little space, although you won’t add the finishing touch – the huge sloping window – until later into the build. We particularly liked the use of black-coloured ‘sausage’ pieces to form the fire escape!

From the balcony you’ll continue building more walls – including Monica’s cupboard of shame – before getting around to the kitchen area. The kitchen is as colourful as the real-life show version, and packs in shelves filled with detail. It’s quite possibly one of our favourite parts of the whole set. It’s just a shame that there’s so much detail here – especially when the table and chairs are built (more on those shortly) – that it’s hard to appreciate it all. Like in Joey’s apartment, there’s a brick-built fridge, sink and cooker. But different methods are used to ensure nothing is repetitive.

Once the kitchen has been completed, there’s not much left to do but add some more furniture. There’s a small desk to go by the large living room window, and the table and chairs that form a centre point of the kitchen. The chairs are all odd and, as is the nature of LEGO seating, they appear rather oversized compared to the rest of the kitchen. They also make it difficult to move around the kitchen. There isn’t much room in that area, and some pathways are completely blocked.

One of our favourite parts of Monica’s apartment – aside from the couch area, which just looks fantastic – is the sloped feature window. Its placement is ingenious; hinged bricks are used to hold it in place at the bottom, and it’s simply resting on slopes at the top to keep it in place. The brick-built curtains here looks fantastic, too.

Overall, you’ll spend somewhere between 5-6 hours building The Friends Apartments. But every moment of the build is a joy, and seeing each apartment start coming together is a lot of fun. Each little nod to a moment in the series is great, and a lot have been squeezed in. More would have been nice, but obviously there’s a limit to how much could be done with the space available.

LEGO 10292 The Friends Apartments is both a play and display set. Despite being aimed at adults, this is designed to be played with – after all, it’s a studio set. And studios are designed to be acted in! The inclusion of random props – the Giant Poking Device, Phoebe’s colourful doll’s house, a turkey, Phoebe’s ‘Gladys’ painting – are there to encourage play, and for builders to act out their favourite scenes from the show.

Of course, even as a display piece The Friends Apartments looks fantastic. But you’ll need a lot of space. When both apartments are joined, they’re 65cm long and 31cm deep, so you’ll need a good amount of shelf or counter space. Thankfully, each apartment can be separated if you want to fit one or both parts into a smaller space. You could also use each separate couch area as a mini display if you want to, just as you could with Central Perk. (Though, arguably, as great as both seating areas look, neither are quite as iconic as the one from Central Perk.)

At £134.99, LEGO 10292 The Friends Apartments is not a cheap set. But in terms of size, the amount of detail included, and piece number, we feel like it’s a very fair price. This is more than double the size of Central Perk, which has an RRP of £64.99. So at just over twice the price, it works out nicely in terms of value.

If you’re a Friends fan, it’s hard to put a price on the nostalgia you’ll get from building LEGO The Friends Apartments. There’s a whole lot of joy to be found here. And as big Friends fans ourselves, we couldn’t be more happy with the set. It’s worth every penny, and one of the most enjoyable builds we’ve put together in a while. 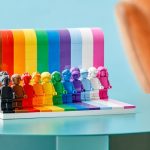 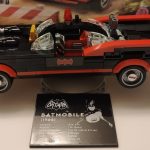