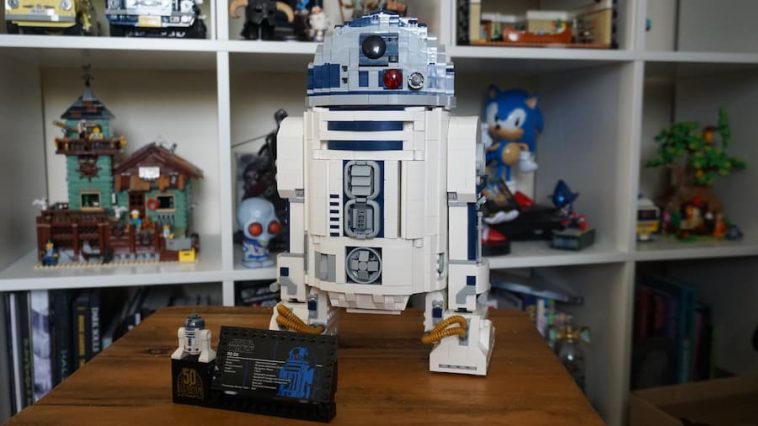 If you’re a Star Wars fan, chances are you’ve grown fond of R2-D2 over the years. Without this lovable little droid, the fate of the galaxy could have unravelled in a very different way. And thanks to LEGO you can now build a wonderful replica of him yourself, providing you have £180 and about 10 hours to spare.

It’s not the first time a large-scale model of R2-D2 has been available of course, but with the last one discontinued in 2014 and now selling for a pretty sum second hand, we welcome this revised model with open arms. And there are a number of improvements, too.

LEGO 75308 R2-D2 is one of those sets that also presents you with a plain white box when you open up the outer box and dig around a little. Scattered between both boxes you’ll find 16 bags in total, numbered from one all the way up to thirteen, as well as two loose technic pieces.

There’s also an instruction book, of course; a 284-page one, in fact, with foreword by the Creative Director of Lego Star Wars and some information about R2-D2. There’s a sticker sheet, too, with just one large sticker.

It’s a nice model to build, LEGO 75308 R2-D2. Though there’s one part of it that could frustrate you. It did me, but if you pay very close attention to the instruction book you should be alright. The troublesome part is actually the first part you build: the centre leg. It’s comprised largely of Technic pieces, with a mechanism that’s hard to get your head around until much later in the build. Until then, you’ll just have to have faith in yourself. After building the centre leg, you then build a frame around it, forming the basic body of R2-D2.

With the frame built, you move away from Technic and start using some good old System pieces. You build the sides of R2-D2, before essentially hanging them onto the frame. Flat 3×2 pieces are used on their undersides to secure them in place. You’re then able to move onto building the legs.

When it comes to the legs, LEGO System is used to create the central part of their outer shell that sits around a Technic skeleton. They’re then attached to the central frame. The feet are then made and attached, finally allowing you to stand R2-D2 up and appreciate your work so far.

At this point, you should also do what I didn’t do: test the mechanism that allows the central leg to be deployed by lifting R2-D2’s body a little and tilting him backwards. If it works, hurrah! If not, you need to go back and check your Technic handiwork. By moving R2-D2’s body back into its neutral position, you should also be able to retract the leg again.

With the mechanism tested and working fine, it’s time to finish the legs with additional casing and detail, before moving onto the front and back of R2-D2. The front is done first, with some wonderful detailing such as numerous grills and a vent. The back is boring in comparison. Both are hung onto the frame like the sides, and strategically held in place with other pieces attached afterwards.

The head is built last. A circular base is established and then built upon until a hollow dome has been created. One small quadrant can be lifted and twizzled around, and another can be removed to reveal a lighsaber hilt. Once built, the head has to be connected to the body via a turntable plate. It’s a bit tricky to locate, but once it’s on it allows you to rotate it, and it’s on pretty solidly.

Once R2-D2 is done, all that’s left to build is the included R2-D2 minifig and the included stand. The single sticker included is applied to the large plate to create an informative plaque.

While LEGO 75308 R2-D2 isn’t designated as an Ultimate Collector’s Series set like its predecessor, it is in all but name. That means most will want to buy it for display, and those who do so will be very happy with it thanks to the wonderful amount of detail that’s been packed in.

There are, however, lots of play elements that make R2-D2 an expensive toy if needs be. Beyond the snazzy new mechanism that allows R2-D2’s central leg to be easily deployed and then stowed away again, you have slippy studs on the feet that allow you to move him about without much friction, and two rods located on the rear of R2-D2 can be pushed in to reveal tools that emerge from doors on the front. It’s just a shame that they have to be manually retracted, and the doors manually closed afterwards. The final interactive touches are R2-D2’s periscope which can be raised and lowered, and the hidden lightsaber compartment. So, play or display? We’d say primarily the former, but it’s truly up to you on this one.

Coming in at roughly the same price as the previous Ultimate Collector’s Series version of R2-D2, released some nine years ago now, we feel that this new, updated version of one of Star Wars’ most iconic droids offers excellent value for money. While it isn’t that much of a bigger set piece-wise, excellent work has been done to make this model of R2-D2 more accurate then ever, with the body being more rounded, the legs being more flush, and the head having less exposed studs.

Throw in some additional functions that bring the model to life a little, and you have one of the best brick-built droids available. There’s still some room for improvement, but if you’re Star Wars fan who’s just got into LEGO, or missed out on R2-D2 the last time around, then you won’t be disappointed if you decide to part with your cash and add this to your LEGO collection. 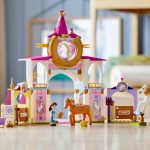 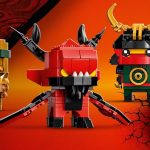