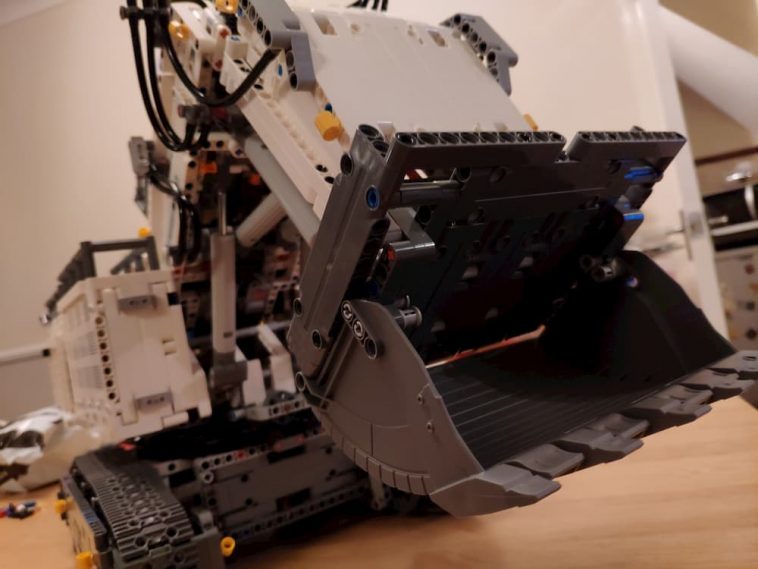 With over 4,100 pieces, the Liebherr R 9800 Excavator is the largest LEGO Technic set ever made. And among those pieces are two smart control units and a whopping seven motors.

If heavy industrial machinery floats your boat, then the Liebherr R 9800 Excavator is likely to get you a bit flustered. After all, you can’t own the real thing unless you’re particularly rich and have a considerable piece of land on which to make to make use of it. Have you actually seen one of those things? It’s the size of a block of flats! To own this LEGO Technic version of Liebherr’s behemoth, you just need to be a bit rich, or at least flippant with your money – it’s £400, putting it up there amongst LEGO’s most expensive sets – and have just one room that’s free of clutter.

Inside the gargantuan box for the Technic Liebherr R 9800 are 31 numbered bags (some of those contained in yet another box, as is becoming the norm for large LEGO sets), one scoop, one bag of rubber tubes, and one box of control units and motors. There are also two of the thickest instruction manuals I’ve ever seen, and two sheets of stickers. If the sheer size of the box doesn’t drive home that this isn’t your standard LEGO Technic model, trying to spread its contents out onto a table will.

Despite being 31 bags in total, they’re only numbered between 1 and 6, meaning each stage of the build is gargantuan in itself. It also means that finishing a set of bags is quite the milestone – but each stage can become quite laborious. Expect to spend at least a few hours on each set of numbered bags; granted I’m not the fastest builder, but it took me about 20-25 hours to build the whole thing. There are many aspects of this model that can go wrong if you rush into it, so I took my time to make sure everything was right as I went along.

Starting with the seven bags all labelled 1, you first find yourself making one side of the LEGO Technic Liebherr R 9800’s massive tracks. There’s some technical gearwork to be done, then you move onto assembling the base between the tracks before creating the tracks for the opposite side.

The first control unit is placed in the base, and a motor sits in each side to power the tracks. What’s neat is that the control unit is screwless, so there’s no hunting for a screwdriver to place in the six AA batteries that are required. There’s not much fuss when you need to replace the batteries, either; you just turn the model upside down and open the battery cover. The final part bag of this stage is creating the tank-like tracks for the model, which requires you to join up over 100 tread pieces. It’s monotonous, but thankfully over quite soon.

At this point it’s a good time to test functionality. Installing the Control+ app on your smart device, you’ll find that it’s recommended that you test your build at the end of each set of bags, rather than wait until you’re finished. Fail to test and if you’ve done something wrong, you’ll rue having to take the Liebherr R9800 apart again. Trust me. At this point all you can do is drive the machine forward and back. You just need to be careful and make sure that certain components are lined up correctly before carrying on.

Moving onto set of bags number two: there are eight of them this time. Of course, most bags have smaller unnumbered bags of lugs etc. in them, too. That goes for all stages of the build. With this set of bags you’re building the main structure of the excavator. As you go along, you’ll find it’s quite back-heavy at this point, so be careful not to tip it up if you’re working on a table, as that could spell disaster.

Things start coming together by the end of the second lot of bags though. You start to get a scale of how big the model’s going to be. Basically, huge.

Another control unit goes into the main structure. Again, it requires 6 AA batteries, and they can be replaced by turning the model upside down. Once you’re done, it’s time to test again. This time, you’re testing the rotation of the body on the base. If it’s good, carry on. If not, uh-oh.

Set of bags number 3 is all about building the LEGO Technic Liebherr R 9800 Excavator’s giant arm. With the main structure pretty bulky by now, you’ll be happy to hear that you build the arm separately then attach it. It frees up some work area, which you’ll be thankful for.

As you’d expect there are a lot of gears involved, and three motors need to be situated inside the arm for a wide range of movement. You attach the arm to the main structure via lugs and cables once it’s built. Special mention must go the excellent colour-coded cable tidies that LEGO has introduced. They make routing the cables from motors to control units much simpler. Then you test your build yet again. All functions are now available, but you need to wait until you’ve finished the model to see what the beast is fully capable of.

The three bags all numbered 4 are all simply decoration for the body of the LEGO Technic Liebherr R 9800 Excavator. There’s nothing arduous or particularly thrilling about putting them together, but they add some nice details. After doing all the gear work, you’ll be happy for the simplicity.

When you’re onto the six bags all labelled 5, you’re onto the final stretch. By this time you’re likely to be a bit fed up of building to be honest. The Liebherr 9800 isn’t the most repetitive build or anything, but the sheer size of it makes it feels a lot like work. With each set of numbers involving so much work, it’s hard to take a break in between – unless you’re happy to leave hundreds of loose LEGO pieces out on a table while you wander off to recuperate. Not recommended if you have cats/children/ghosts/housemates who like to touch your stuff. So basically, once you’ve started a set of bags – especially with the first few – you’re locked in for several hours at a time.

With bag set 5, you’re applying the final details, which include a cabin for the machine’s operator, as well as steps and rails for the many platforms. You’re also tasked with creating a structure of rubber pipes, which is a pain in the arse to be quite frank.

It looks pretty good when it’s done though. Throughout the build there are times where the instructions don’t feel like the best they could have been, and they really come to a head here. Some steps feel like they would have been better done earlier, and it’s not always perfectly clear where you’re supposed to put some things. I raged a little, but the fact that I was on the final stretch made me persist.

And that’s it; the single bag numbered 6 is simply a bag full of grey columns that serve as bits of rubble for you to pick up. Maybe don’t bother? File them away with your spares instead.

When it’s finally built, the LEGO Technic Liebherr R 9800 Excavator is fantastic. It almost feels like all the hard work (which it really is) is worth it.

It’s a hard set to call either play or display; it’s a bit of both, really. Though more of a grown-up’s toy – its price tag and the complexity of the model means it’s not the sort of set you’re going to want younger children playing with. But its power functions means that if you’re not going to play with it at least a bit, it’s being somewhat wasted.

After opening the Control+ app on your smart device and connecting both smart controls to your phone, you calibrate your contraption and then you’re ready to go. To connect the smart control located in the body of the model, there’s a handy hatch that you can lift up. To connect the other in the base you need to reach under the model. You’ll find that you can easily drive the machine forward and back, and turn like a tank. The main body can spin all the way around. The arm can be raised and lowered, and also extended. And the scoop can be rotated. Once you’ve picked up a load it can be dropped out by opening the scoop. It’s just like having your own little excavator really.

The Control+ app offers numerous methods for you to control the LEGO Technic Leibherr R 9800 Excavator, but the default is surely the best. You can also employ a little bit of programming chops to map multiple movements to one button, and if you want to gamify your experience, achievements can be obtained by completing tasks. Let’s face it though: all you’re really going to want to do with it is drive it around and try to pick things up. And you can do, albeit slowly. The Liebherr R 9800 Excavator really isn’t swift. Then again, it’s that heavy I’m surprised it moves at all.

If you’ve ever wanted your own miniature excavator, look no further. LEGO has perfectly captured the spirit of the Liebherr R 9800 in this Technic recreation. At £399.99 it’s a bit pricey, but considering all the motors and the two control units, it’s to be expected. And like most Technic sets it’s often available at a reduced price from numerous retailers, too.

This is not a set for young Timmy this Christmas though. Despite being marked as age 12+ on the box, it’s a complex build that requires a huge time investment. You also need plenty of space. Up to eight bags of parts, the partially built model and a sizeable instruction manual will easily occupy a dining room table for a hours at a time. And once it’s built you’ll need somewhere to keep it: you won’t be wanting to take this model apart anytime soon.

If you have the money, the Liebherr R 9800 is a worthy investment; it really is an impressive (and huge) set. After all the hard work building it, you’ll become pretty attached to the thing. I know I have. 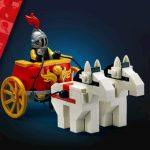 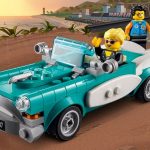