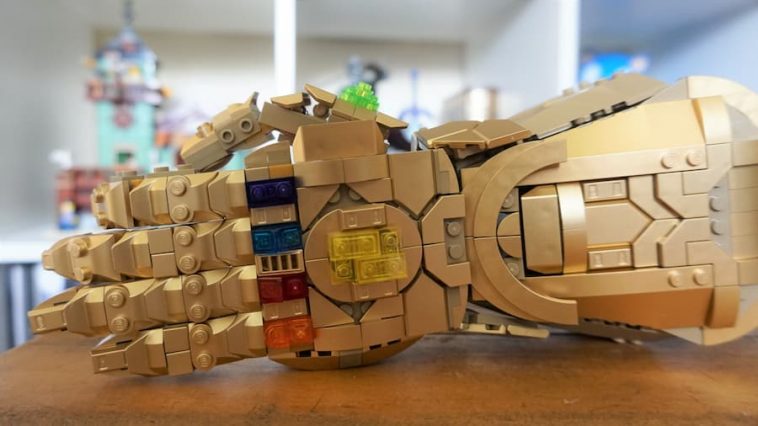 To Infinity… and beyond! Oh wait, wrong movie.

This is a replica of Thanos’ powerful Infinity Gauntlet, first brought to life in a series of 1990s Marvel comic books. You’re likely more familiar with it, though, from the recent Avengers movies. This LEGO replica fortunately doesn’t contain the power to destroy the universe. You can’t even wear it on your hand. But it does make a rather striking display piece. Read on to see our thoughts about LEGO Marvel 76191 Infinity Gauntlet.

Inside the box of LEGO 76191 Infinity Gauntlet you’ll find three sets of numbered bags and a 100-page instruction booklet. The instruction book is fairly small in size, but it’s prefaced with a nice introduction about the model from set designer Luce Baldwin and some rather eye-catching images of Thanos himself.

Happily, there are no stickers to be seen. Hooray!

This was a very fun, albeit rather quick, build for me. Putting it together feels very methodical, and if you’re the sort of person who enjoys order rather than chaos, you’ll find comfort in that. The first bag takes you through constructing the base and the stand, around which the gauntlet will be constructed. The second builds the base of the gauntlet; four individual sides which make up the forearm section. Finally, the third bag sees you building the hand and fingers.

There’s an overwhelming amount of shiny ‘gold’ bricks here, which is a sheer pleasure to see. Never has a set had so many sparkling pieces in it! Of course, these are juxtaposed with duller ‘beige’ pieces, but together they work to great effect, resulting in an eye-catching glove with just the right amount of bling in there.

There are some nice building techniques used in putting together LEGO Marvel 76191 Infinity Gauntlet. The forearm part of the model is built using four individual pieces, which then attach to the main frame, resulting in an even ‘arm’ shape. The fingers are also very well constructed, each having movable knuckle joints that bend in a realistic way. The base of the thumb is perhaps a little too fat – though I imagine Thanos does have huge thumbs, so it’s hardly a dealbreaker. Have you seen the man? He’s huge. His thumbs will be too.

This is very much a display set, through and through. Its base design and dimensions means it lines up perfectly with LEGO’s range of busts, and sits nicely amongst a collection of those. Since you can’t wear LEGO 76191 Infinity Gauntlet, there isn’t much play value here at all. Well, you can adjust the fingers, allowing for some rather rude gestures if you’re so inclined – but this is a family site, so we won’t talk about those!

On the face of it, £59.99 for a sub-600 piece model sounds rather expensive. It’s even a little more expensive than most of LEGO’s ‘bust’ range, which the Infinity Gauntlet sits alongside. With the exception of Darth Vader (also £59.99), the rest have so far been £54.99 or less. So this isn’t a budget set, but it is a very well constructed display piece. I also wonder if the slightly inflated price goes towards the large amount of shiny ‘gold’ bricks in this set – they’re most usually a novelty only found in miniscule numbers.

Regardless, if you’re a Marvel fan, this is no doubt a display piece you’ll want in your collection. It’s a very fun build and the finished model is sturdy, pleasant to look at, and fun to fiddle with. 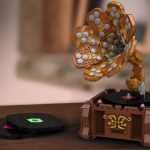 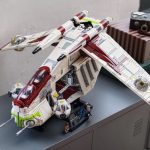