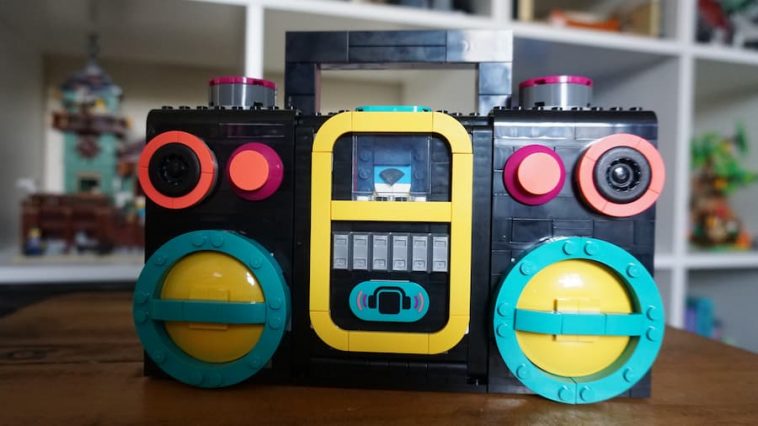 Part of LEGO’s rather ill-fated Vidiyo series, The Boombox is the most expensive set in the range. It’s also the one that we’ve been most interested in. Vidiyo’s main feature is its AR app integration; the idea is that once the sets have been built, they can be used to stage music videos thanks to the app’s features. But we’re adults, that doesn’t appeal so much to us. What does appeal, is how much like an actual Boombox this set looks when it’s all folded up. It really is eye-catching.

Open up the box for LEGO Vidiyo 43115 The Boombox and you’ll be greeted by an instruction booklet and seven numbered bags. Good news: there’s not a sticker in sight! In a nice touch, there are numerous printed bits here that in other ranged would most likely be stickers.

Spread across the bags of bricks are four minifigures: a spaceman, a butterfly, a tiger and a zombie rocker, all complete with musical accessories. We’ll talk more about the minifigures shortly, because they’re a particular highlight of the set.

Putting together The Boombox is a rather straightforward task. It took around two hours altogether, but it was a pleasant built. There are some repetitive bits – the inside of the Boombox has pairs of matching speakers, so applying small studs to cubes several times does get a little boring. But these are done with fairly quickly, and the finished effect is rather nice. Basically, each ‘speaker’ has four faces, one representing each of the minifigure. Each one can be twizzled around depending on who you want to be ‘on stage’. It’s a really nice touch, even for those of us who don’t care to play with the AR functions.

As mentioned previously, there are some nice printed bits here; you can see the printed keyboard tiles in the picture above, and a few others equally add some nice detail. It always is a relief to put together a set free of stickers. I particularly love the brick-built musical note though. When the boombox is open, it provides a wonderful central focal point. When it’s closed up, though, you won’t see this.

And it’s when it’s closed up that I personally think LEGO Vidiyo 43115 The Boombox looks its best. It really does look like a compact retro boombox. It’s incredibly solid, and a carrying handle built into the top is a really nice finishing touch. It’s put together sturdily enough that there’s no risk of it falling apart when you pick it up (and coming off of the VW T2 Camper Van which crumbles when you simply look at it, that really is a relief).

There’s a fantastic use of colour, with some uncommon brick colours we don’t see very often – like the neon orange. Juxtaposed with yellow, purple and the gorgeous blue-green, the finished model looks fantastic. The details really jump off the black body, and the central design, which includes a little window, is almost believable as a radio and tape deck. It’s fantastic.

Equally as fantastic are the four minifigures included in the set. In no other LEGO series would you get such an eclectic mix of minifigures, and these are surely one of the best parts of the Vidiyo range. They’re beautifully moulded, and of particular note are the butterfly singer’s wings. They’re exquisite. We of course have a soft spot for the zombie rocker too, and the moulded cat head is delightful.

The nature of LEGO Vidiyo is to be played with. Once built, 43115 The Boombox is designed to be a stage for which children can act out their own music video. Downloading the Vidiyo app allows you to interact with the set, the minifigures and the 16 included ‘BeatBits’ to create a musical master piece. Scan the BeatBits tiles (pictured below) and you’ll get a special sound or visual effect, which can be put together to create something unique. It’s fun, but it’s of course not for everyone.

We do think The Boombox is a fantastic set simply as a display piece, especially if you’re a music fan. Pop this next to your actual music set-up and it makes for a wonderful novelty item. It’s compact enough that it doesn’t take up much space, and it’s eye-catching enough to be a conversation starter. While there’s nowhere to store the BeatBits inside the actual model, these printed tiles can be put to good use elsewhere – if you’re a MOC builder, they make perfect wall art, for example.

Admittedly, £89.99 is a little steep for LEGO Vidiyo 43115 The Boombox. But you’ll likely find Vidiyo sets with at least 1/3 off their price – we picked this up from Amazon with 50% off. With a discount, it’s a wonderful set.

The AR functionality, although supposedly the main attraction, to us is simply a bonus. We love The Boombox for the model alone. It’s different from almost anything else you’ll find from LEGO, and that’s enough for it to warrant a place in our collection. The wonderful minifigures and printed BeatBits are just the icing on the cake. 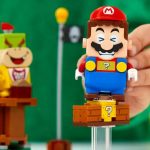 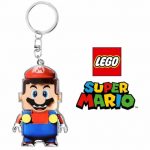