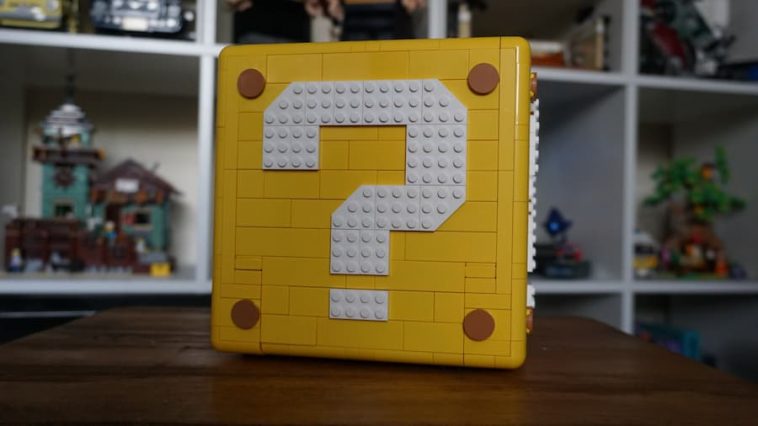 There is so much to love about LEGO’s latest partnership with Nintendo. The Super Mario 64 Question Mark Block is undoubtedly delightful if you’re a Mario fan. But even if you’re not, it’s impossible not to admire the ingenuity that’s gone into creating this cube. The way the worlds pop out of the top and secret panels appear from the sides – it’s like magic! Wonderful, LEGO magic.

What’s in the Box?

Let’s jump straight to the good news: there’s not a single sticker in sight! Inside the box you’ll find an instruction booklet and 13 sets of numbered bags. Most earlier numbers have two (sometimes three) bags. Later numbers tend to be just one bag, so they’re easy to get through.

The instruction booklet is 264 pages and is prefaced by information about the set, Super Mario 64 and the levels featured in the set. It’s a really nice touch.

I’m going to cut straight to the chase here: putting together LEGO 71395 Super Mario 64 Question Mark Block is one of the most satisfying LEGO building experiences I’ve had in a while. It’s the biggest set I’ve built since the rather woeful Volkswagen T2 Camper Van, and it has been the perfect antidote to restoring my faith in how magical building LEGO can be.

At face value, the Super Mario Question Mark Block might not look like much. It’s a block. There’s a lot of yellow, and its four outward-facing sides appear to be identical. Surely it’s a boring, repetitive build, then? That couldn’t be further from the truth. The way the Question Mark Block is constructed means there’s never any time for repetition (apart from the very last step, when you need to create two ‘?’ concurrently – but that’s the only point where you’ll ever build something identical). Instead, every stage of the build leaves you more and more dumbfounded and impressed. That may sound like an exaggeration, but just look at the ingeniousness of this thing:

Considering how ‘technical’ the Question Mark Block seems in function, there’s actually very little Technic building involved. Everything is very cleverly constructed using very basic hinges and joints, but yet the final result is something that appears way more complex than it actually is. Perhaps the best thing about this build, though, is just how effortlessly everything works. Even after spinning around the top of the cube to reveal the levels inside twenty or thirty times, it still feels like magic. Yes, I keep using that word – magic – but it really is the best word to describe this fantastic build.

The Question Mark Block itself is really only the outer shell; the real feature is on the four level dioramas hidden inside. If you’ve never played Super Mario 64 before, you’ll probably think they look rather neat then think no more about them. But if you have played it (still one of the best Mario games of all time, fyi), you’ll recognise each one of them as actual levels from the game.

The level of detail there is incredible; from the flying camera guy outside Princess Peach’s castle, to the tiny recreations of portraits Mario will jump through to access each level, it’s a Mario fan’s dream. They’re even roughly to scale, with level parts appearing exactly where you think they should. The penguins on Cool, Cool Mountain make it so you know exactly what you’re looking at, and the cannons, floating islands and of course King Bob-omb himself means that Bob-omb Battlefield looks almost perfect.

Compatible with LEGO Mario and Luigi

One extraneous cool feature of LEGO Super Mario 64 Question Mark Block is that it’s compatible with the electronic LEGO Mario and Luigi figures. Hidden inside Princess Peach’s castle is a scannable block, and activating it with either Mario or Luigi will bring the set to life in a whole new way. Yes, it’s a shame that the figures are giant in comparison to the level dioramas, but it’s a nice touch. Without it, this set would still be incredible. But it adds a bit more value for those who have existing LEGO Super Mario products.

Being an 18+ set, you’d be inclined to think LEGO 71395 Super Mario 64 Question Mark Block is purely a display piece. But look at it; this thing is designed to be played with. From popping up its level dioramas to finding the hidden openings on the side of the cube, you really aren’t getting the most out of it unless its being explored. And when you consider the added electronic Mario functionality too, there really is a lot of play value here.

That doesn’t mean you can’t have it on display and leave it be, however. Whether you want the cube closed or have the levels exploding from the top, this is a fantastic-looking set that any LEGO or video game display will benefit from.

Honestly, I was genuinely surprised that LEGO Super Mario 64 Question Mark Block is ‘only’ £159.99. Yes, it’s still a lot of money, but because of how much ingenuity is packed into this set – and considering Mario branding alongside the 2,064 piece count, I expected a slightly higher price tag. As it is, it’s one of the best sets of this price point I’ve built in a long time. It’s so cleverly designed, and every moment of the built was a joy. Seeing it come together and exploring its features really makes it worth every penny, in my opinion. If you’re a Mario fan, it’s a must-buy. And even if you’re not so familiar with the moustachioed plumber, it’s hard not to be impressed by this set. It really is magical. 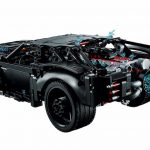