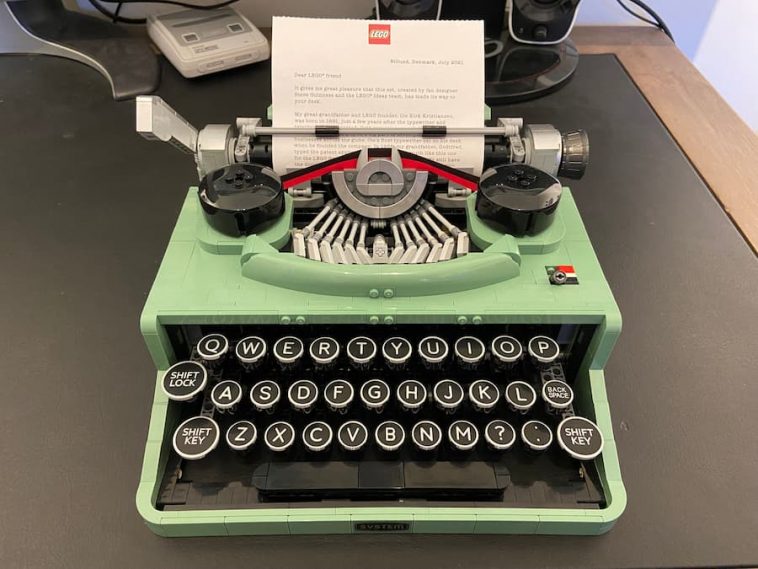 The most recent graduate of the Ideas academy, and brainchild of LEGO Masters UK Series 1 winner Steve ‘thebrickconsultant’ Guinness, this set’s a full-sized homage to the typewriter used by LEGO founder Ole Kirk Kristiansen himself.

Like the Botanical range and LEGO’s recent foray into hanging art, it’s part of the company’s burgeoning line of AFOL-specific sets, intended to be a conversation-sparking showpiece ornament. But kern the finished article really capture the unique character of vintage typing machines?

Boasting more bags than a Radley store, the LEGO Ideas 21327 Typewriter box contains 19 different external bags of pieces as well as a plump A4 card wallet. Forgoing all accepted numbering conventions, those 19 bags are labelled 1-11, with two additional ‘1’s, repeated ‘3’s, ‘4’s, ‘5’s, ‘6’s and ‘7’s, and even an unnumbered bag to keep all mathematicians on their toes. There’s a further 15 smaller, unnumbered bags nestled inside those external bags, though sadly the set stops short of some Matryoshka-esque bag-within-a-bag-within-a-bag action.

Inside the wallet, meanwhile, is a 260-page instruction booklet and a separate pad containing detachable letters from LEGO chairman Thomas Kirk Kristiansen. You’ll find 43 language variations in all, with the appropriate letter for each builder intended to be displayed in the final model itself as if it were freshly typed. Finally, there’s a pleasant surprise in discovering that the obligatory sticker sheet contains just two stickers: labels for the front and the back of the typewriter.

Things start off humbly enough by throwing you straight into the act of making the type levers: the long bars upon which will sit the Typewriter’s keys. There are 32 of these in all, most of them belonging to one of three groups of differing lengths, each of those groups containing nine identical designs. Unsurprisingly, seeing three consecutive spreads of instructional pages with the dreaded ‘9x’ symbol suggests the typewriter build will be painfully repetitive. (Now there’s a word that stays true to its definition: only 30% of its ten letters appear just once.)

Before monotony threatens to bite, however, the highlight of the entire build begins as you start to thread the full collection of type levers, along with extra spacers and joists, onto four long, anchored axles that run the entire width of the LEGO Ideas Typewriter. It’s a meticulous act bearing uncanny resemblance to bead-stringing and crocheting as you weave a Technic tapestry of beams and spacers while simultaneously assembling the surrounding frame and anchoring it in place with corner plates.

The resulting loom-like tangle of levers is now ready for the keycaps, and if the tiny sticker sheet didn’t already give it away, splitting open the next bag elicits sighs of relief at the sight of discs printed with letters, words and punctuation. Granted, the printing isn’t perfect. Under close scrutiny it’s clear that some of the silver edging is disappointingly off-centre. Thankfully, once the keys have been clipped on and the front frame is completed the blemishes aren’t too noticeable.

After pegging in new parts of the side casing it’s time to focus on the inner workings of the typewriter. The biggest element here is a caddy that hooks over the key lever ends, behind which clip the moving type bar mechanism plus a swarm of sprockets, connectors and even an eight-blade propeller. The latter contraption wouldn’t look out of place under a car bonnet, and is just as fun to build as it looks. To cap it all off, the final component required to produce the typewriter’s magic typing illusion comes in the form of a primed quad-pneumatic cylinder element.

It works like this: whenever you strike a letter, the type lever’s seesaw design knocks into the long caddy, which then in turn kicks a single type bar upwards to mimic letters being thumped onto paper. Through millimetre-precision design the very same caddy pop motion also nudges a small element attached to the engine-like chunk, momentarily freeing up a sausagelink of gizmos and whirligigs to let the pneumatic cylinders fractionally expand… before it’s triumphantly halted as the propeller catches in place once more after a one-eighth rotation. And that ridiculously simple design is what causes the typewriter’s carriage to stutter horizontally after each typed letter…

Ahem, yes, that’s all rather hard to parse in plain text, so take a look for yourself in the video below. Pay extra attention to the wonderful clacks and clatters of the type bar’s strikes and the carriage being slid back into place at the end of each line. It’s LEGO wizardry at its most elegant, so drink it all in now because once the typewriter’s finished it’s forever hidden from view.

That’s because the closing steps of the build involve sealing it off with the rest of the casing, then making the big paper roller and its housing: officially called the platen and carriage. This sits within a gulley at the back of the typewriter and connects to the pneumatic cylinders to bump it sideways.

Special mention goes to the sticker affixed to the back of the carriage. It’s a lovely little Easter egg: SG/NGUOYD is a coded message from the original fan creator, standing for “Steve Guinness/Never Give Up On Your Dreams.” Aww.

Like a birthday cake topped only with plain icing, things don’t look quite right yet, and a few small flourishes are needed before we can slam that full stop key on the build process. A dozen decorative type bars cover the gaping hole at the top of the typewriter, the carriage gains a small lever, and a red-and-black fabric ribbon, created specifically for this build, complete with spools on either side round off the look.

All that remains is to select the correct slip of paper from your pad and feed it around the platen. This is genuinely the toughest and most stressful part of all. It turns out LEGO isn’t the ideal medium to coax paper through a tight curve, and there’s the constant worry the paper could rip during the operation, forever spoiling the display. No pressure when you do this…

A display piece first and foremost, the single moving typebar and sliding carriage features grant the LEGO Ideas Typewriter a sliver of tinkering functionality that’s just begging to be exercised on occasion, whispering to twitching digits like a resting Newton’s cradle.

It would be excessive to claim that the limited moving parts are enough to play with the Typewriter, especially given the keys’ propensity to spin when struck (the urge to immediately realign all askew letters is an almost-painful reaction from deep within the brain, akin to that when faced with a lopsided painting), but it’s a party piece that demands to be operated in front of curious visitors.

£179.99 will net you other LEGO sets with more parts. It’ll buy sets that dwarf the LEGO Ideas 21327 Typewriter. It’ll find you sets that take longer to build, or are bursting with playtime once constructed. What it’s unlikely to secure is another LEGO set as capable of wowing somebody who’s yet to join the AFOL ranks, making them reassess preconceptions about LEGO being anything but a child’s toy.

Its capabilities as a sceptic-to-AFOL converter is far from the only reason the Typewriter is worth the asking money, however. A fantastically entertaining and varied build split between Technic gubbins and System casing is almost worth the price of admission alone. The construction constantly folds in different building techniques, with inventive interlocking features that neatly secure all the separate elements together with pleasing regularity.

And once built? You’re left with an effortlessly cool curio for any office environment or living space, genuinely capable of passing for an antique typewriter at first glance. So much so I’ve ditched the plan of showcasing it in my display unit alongside my actual antique typewriter; instead upgrading its spot to a permanent position on my work desk. A set this good deserves to be kept in a prominent spot. 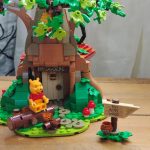 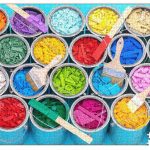