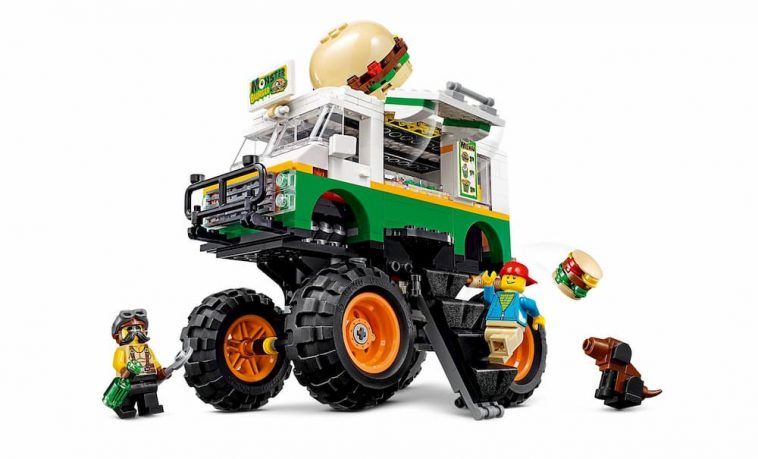 Priced at £44.99, the LEGO Creator Monster Burger Truck (number 31104) isn’t the cheapest of sets for what it is. It’s moderately sized, with 499 pieces – but it’s an exceptionally unique model, and we feel like that’s what you’re paying for here. There are some really nice features, which we’ll get to later, and it’s certainly a striking-looking model. But is it a worthwhile purchase?

You can see the contents of the box laid out in the picture below. There are three bags of bricks, a small sheet of stickers (three in total), an instruction book and four huge, chunky tires.

If you’re building the main model of the three (and come on, why wouldn’t you be?) you’ll need all bricks from the bags. The other two models will likely leave some spares.

There’s two minifigures included with the set, as well as a (weird-looking) brick-built dog.

It took us around an hour to build the burger van. It’s a fairly quick one, then, but it was very enjoyable. There are a few nifty parts: of course, the giant burger model on top of the truck stands out. But there’s also a neat feature in the stairs leading up to the serving hatch. They fold away when they’re not in use, with a sliding mechanism made out of standard bricks. It works very well, and it’s a neat touch.

There’s nothing too complicated about building the Monster Burger Truck, so it should be fine for younger LEGO fans to complete with minimal assistance. There are only three stickers to the set, too. Some may say that’s still three stickers too many, but they add nice touches to the set. Once’s the license plate for the back of the van; one’s the signage at the front, and one is the monstrous menu, complete with prices.

However, despite the Monster Burger Truck set being a 3-in-1, the lead set – the monster truck itself – is leagues apart from the other two models. One’s a beach buggy type vehicle, and one is a drag racer. More so than other 3-in-1 sets, they feel like afterthoughts. We haven’t bothered building them, but it’s nice to have the option if you like.

The Monster Burger Truck is one of those wonderful sets that somehow works both as a play or display set. With an RRP of £45, it’s not too expensive that you’d worry about younger children playing with it. But its unique design means it makes for a great display set and will surely be a talking point.

There’s some really nice detail both in and outside of the vehicle as a display set. But the extra bits and pieces that come with it – a brick-built dog, two minifigures, and a table and chairs set – means it’s great for playing with too.

Ultimately, for £45, we feel that the Monster Burger Truck is a little pricey for what it is. When you compare it to the LEGO City Ice-Cream Truck, which is £18, the truck part itself looks very similar. But the Monster Burger Truck does have 2.5x the number of pieces as the Ice-Cream Truck, which correlates with the extra price. It also has those unique features, such as the giant burger, the huge wheels and suspension system, and that nifty foldaway stepladder.

There’s also the fact that this is a 3-in-1 set, even if the other models don’t amount to a great deal. It’s still worth factoring into the overall value of the set.

Its striking design means it probably is worth buying if you’re a fan of weird and wonderful LEGO vehicles. But perhaps wait to see if you can get a slight discount on it. At £35, this would be a must-buy, but at full RRP, it is a little pricey for what you get. 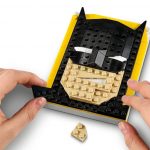 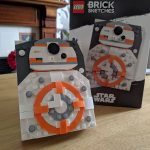