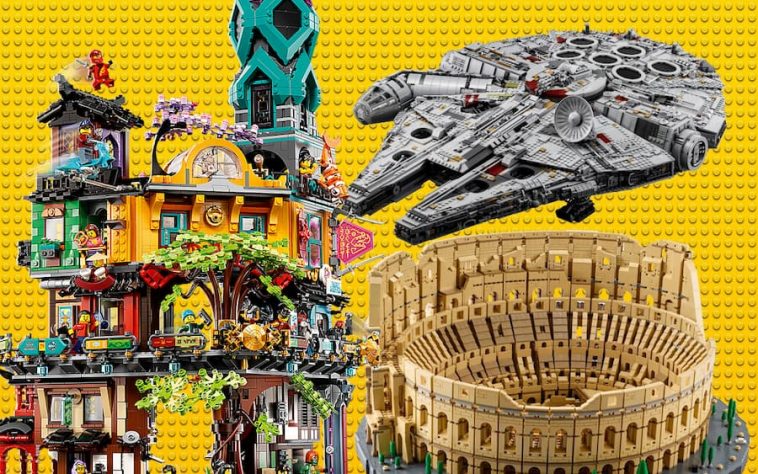 If you’re an Adult Fan of LEGO, the chances are that you like your LEGO models BIG. And we bring good news: there are a heck of a lot of them out there. In fact, every year, LEGO seems to release more and more huge sets. Not so long ago, a “huge” set was 3,000 pieces. Now that’s nothing special. We see dozens of them every year. Now, we have sets over ten thousand pieces. And they’re only going to get bigger.

We’ve rounded up the 12 biggest LEGO sets ever released. And we’ll keep this list updated as bigger sets enter the fold. Read on to find out what the biggest sets of all time are.

Can you even begin to imagine: over 11,000 pieces! Eleven thousand. This is the newest set on this list, and it’s also the biggest LEGO set ever. Being a LEGO Art set though, you’ll have some spare when you’ve finished building the World Map, but it’s still huge. This piece of art is designed to be hung on your wall when you’ve built it, and it’s over one metre long.

At 10,001 pieces, the LEGO Eiffel Tower is unlike anything that’s come before it. Sure, the LEGO Art World Map might technically have more pieces, but you won’t use all of them at once. This, though, makes use of all 10,001 pieces. And when it’s built, it towers over any other model at a whopping 1.5 metres tall. That’s almost five feet tall. Taller than some fully-grown adults. It’s obscene, it’s monstrous, but it’s a fantastic replica of Paris’s most iconic monument.

“They called it the ship of dreams… and it was, it really was.” The newest set on this list is also one of the most impressive. Not only does it have a whopping 9,000 pieces, it’s the longest LEGO set ever released, measuring in at 1.35 metres. You need a lot of display space to show off this beauty, but it’s absolutely worth it. Not only is its exterior brilliantly detailed, but it also has cross-sections showing internal details, too, like the grand staircase, the engine room and some staterooms.

The grandness of the real Roman Colosseum is rivalled only by this LEGO replica. Over 9,000 pieces make up this beautiful model. Not only is it one of the biggest LEGO sets ever released, it’s also the biggest Architecture set by a huge margin. You’ll need a lot of storage space to put it on display though – its footprint is 52x59cm.

This huge LEGO Millennium Falcon, released in 2018, might just be the set that started off the trend of the biggest LEGO sets ever, getting bigger and bigger. Containing 7,541 pieces, the finished ship is 84cm long and 56cm wide. In other words, it’s huge.

The AT-AT is the second-biggest LEGO set in the Star Wars range, and a rather impressive build at that. At just shy of 70cm tall, it’s no slouch, and will make an impressive display piece for any LEGO Star Wars collector. It ought to, though, considering it’s the single most expensive LEGO set released to date.

Three LEGO Star Wars sets in a row? That’s no real surprise, considering UCS sets keep getting bigger and bigger. This is the latest Star Wars Ultimate Collector’s Series model and while it isn’t the biggest ever released, it’s not far behind. It’s a replica of The Mandalorian’s ship from season one of the Disney+ series, made up of over 6,000 pieces. And, like all UCS sets, it comes with a display plaque and a number of minifigs for display purposes.

If you’re a Harry Potter fan, it’s likely that Hogwarts Castle is one of your most sought-after sets. Either that, or it’s already safely in your collection. This over-6,000 piece set is microfigure scale, allowing the model to display the full grandeur of Hogwarts. It really is a beautiful model.

LEGO 10256 Taj Mahal is actually a re-release of an older set from 2008. But this one has one more piece in it (we think it’s probably a brick separator). Back in 2008 though, sets of this size were practically unheard of, making the Taj Mahal a truly stand-out model.

At 5,876 pieces, this recreation of Real Madrid’s home stadium is quite the whopper. It’s a very impressive-looking set, though, especially if you’re a football fan. Just make sure you’ve got plenty of space to display it; it’s 52.3cm wide by 48 cm deep. It’s packed with realistic detail, though, including stands, architectural design and more.

Ninjago City Gardens stands out not only because it’s so huge, but because it’s so beautifully colourful. Just look at it! The amount of detail it packs in is absurd. It’s a beautiful set; you don’t have to be a Ninjago fan to truly appreciate this either.

Essentially four models in one, Diagon Alley truly is a sight to behold. It recreates a section of the popular wizard shopping street from the Harry Potter franchise, bringing it to life with wonderful detail. You can read more about the set in our review by clicking here. 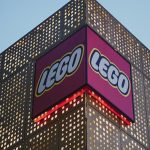 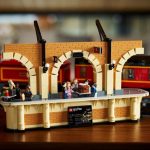