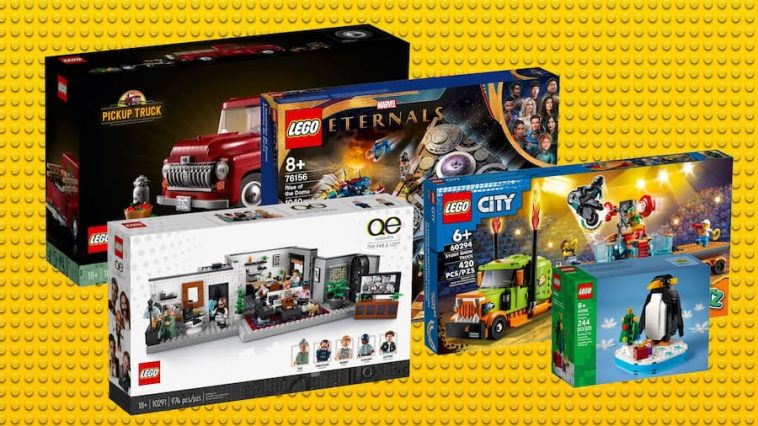 One month ends and another one arrives, and with it comes a host of new LEGO sets. 1st October is shaping up to be a very expensive day for AFOLs, with several large 18+ sets launching, alongside a bunch of festive and smaller sets.

Keep on reading to see a breakdown of every LEGO set that will be available from 1st October. Let us know in the comments which ones you’ll be buying!

Here’s 2021’s addition to LEGO’s long-running Winter Village theme. It’s a snow-topped village house where a family is eagerly preparing for Santa’s visit. And of course, there’s a Santa minifigure included, ready to slide down the chimney. If you’ve been collecting Winter Village sets, this one will fit in perfectly.

This one is a little expensive for its size, but you’re ultimately paying for the reindeers here. They’re moulded and rather exclusive, so getting four of them in one set makes this likely to be sought-after. Besides, it’s a lovely little festive set – just look at the beautiful details on that sleigh! Read more about it here.

The Christmas Penguin fits in the same range alongside the Halloween Owl, Easter Bunny and Valentine’s Bear. It sits on a white (icy) base, and is accompanied by a miniature Christmas tree and some presents.

LEGO 40494 contains two hanging tree decorations: a polar bear’s head, and a wrapped-up gift. You’ll need to have a fairly strong and sizeable tree to hold these – from previous experience with LEGO-built Christmas decorations, they have a tendency to weigh down the branches! They look great though, and make a lovely addition to any tree.

Okay, this isn’t exactly a festive set, but we didn’t know where else to put this. It’s a miniature version of the iconic Disney Castle, complete with a Mickey Mouse minifigure. It’s to celebrate the 50th anniversary of Walt Disney World resort, and it’s sure to be a popular set for any Disney fan.

Queer Eye and LEGO might be the most bizarre crossover ever, but this upcoming set is a must-have for any fan of the Netflix reality series. Like the Friends and Seinfeld sets, it’s a cutaway apartment, perfect for playing and setting up your own episodes with the Fab Five. Yas, queen! See more information by clicking here.

The latest LEGO Ideas set is simply a must-have for any music fan. Not only does it include a beautiful LEGO replica of a Fender Stratocaster, but there’s also a detailed amp, complete with wires to connect the two up. Okay, you can’t actually jam on it, but it’s a fantastic display piece. Read more here.

Unusual for a LEGO Creator Expert vehicle, the Pickup Truck isn’t a particular brand or model. Instead, it captures old-fashioned farm life in the American midwest. Don’t ask us how, but it manages to do it perfectly. This is a fantastic-looking truck, and comes with various plants and farm tools to set the scene.

This one is a fantastic display piece for any LEGO fans amongst us. Shaped like an iconic ‘?’ block from the Super Mario games, LEGO 71395 opens up to reveal four dioramas based on worlds from the Nintendo 64 game, Super Mario 64. It’s wonderful, and we can’t wait to get our hands on it.

Alongside a BIG LEGO Tumbler coming soon, there’s a smaller, more budget-friendly version. This one comes with Batman and Scarecrow minifigures, but the vehicle is ultimately the star of the show. Read more about it by clicking here.

One Batman cowl isn’t enough, apparently. Another one is on its way, this time modelled on Batman’s Classic TV series appearance. We’re not sure about this one though; there doesn’t look much to it for the price, and compared to the Batman Cowl we already have, it’s not quite as eye-catching.

The smallest of the new sets is Eternals’ Aerial Assault, and with just 133 pieces it’s the ideal pocket money set for younger builders. It depicts a winged beast, with two Eternals characters – Sprite and Ikaris – engaging it in battle.

Here’s another battle scene. This one is a colourful land beast, with three minifigures attempting to take it down. Note the cool weapons on the box art – Gilgamesh’s fists are particularly impressive!

The second-biggest of the LEGO Marvel Eternals sets is rather cool. It’s a giant robot of some type, complete with a light brick in the middle of its chest. Along with the four minifigures, there’s also a posable Celestial creature included.

The largest set of the incoming LEGO Marvel Eternals wave is also one of the coolest. This 1,040 piece set lets you recreate the Eternals’ rather nifty triangular spaceship. It opens up to reveal a full playset interior, too. And along with the ship and six minifigures, there are also two buildable Deviants.

This model of the four-winged Sanctuary II ship comes packed with play features: there’s a cockpit that opens up to reveal a pilot seat, firing cannons, and even the Infinity Gauntlet hidden in the cargo hold.

This rather chaotic playset sees Spider-Man and Doctor Strange come together in a scene from Spider-Man: No Way Home. There’s a buildable backdrop, packed with lots of detail, and a giant bug monster.

Here’s another set from Spider-Man: No Way Home. This time, it’s a LEGO Juniors set, aimed at builders aged four and above. It features a small car and a disc-shooting drone. The minifigures are surely the highlight here.

Here’s a scene from Spider-Man: No Way Home that features Spider-Man facing off against Vulture. It features an oversized buildable drone, complete with loaded turrets ready to fire studs.

Not only is the upcoming Cat D11 Bulldozer the most expensive LEGO set coming on 1st October, it’s also the most expensive Technic set. But it’s positively huge, measuring 57cm in length and packing in lots of working functions, including movement, scoop motion and more.

This super-chunky truck is all about the bodywork. There’s no power functions in this one, but it makes a fantastic display piece. It’s rather sizable too, measuring in at 42cm in length.

This is the most expensive of the Stuntz series, featuring two monster trucks, a flaming jump hoop (!), two smaller cars to jump over, a flywheel-powered bike, and seven minifigures. The price feels a bit high for a non-licensed set with only 668 pieces, but we’ll withhold full judgement until we can see it in the flesh. It certainly looks like it packs in lots of stuff.

This one comes with a flatbed truck (complete with a monster-teeth effect on its grill), four minifigures, a stunt bike and a range of obstacles to set up some ultra-cool tricks.

This one includes a double-sided ramp jumping over a rather dangerous firepit. There’s also some sort of spider-infested zone and a ‘caution’ doorway to do some tricks through. It comes with two minifigures and a flywheel bike.

This one’s more pocket money-friendly, and looks rather fun. A ramp leads up to a flaming hoop, and with two included flywheel bikes it’s prime for performing death-defying stunts. Sorry: stuntz.

These next six sets are all the same concept: they contain a flywheel-powered bike and a different minifigure. We can see these being very popular with minifig collectors, since the characters contained within them are pretty unique. 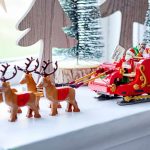 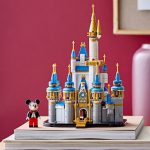