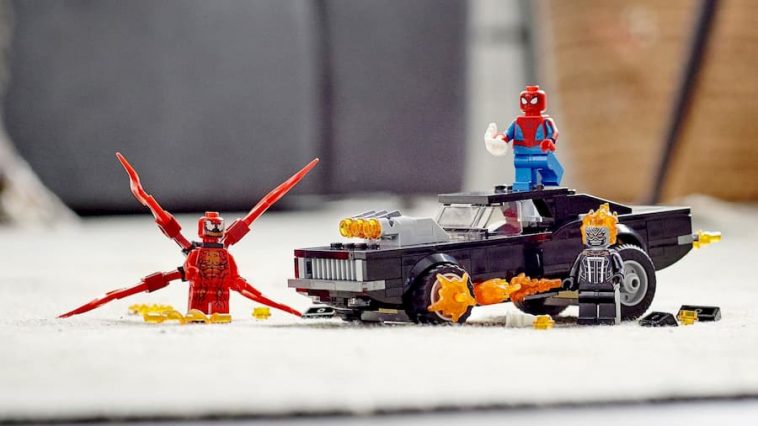 At £17.99, LEGO 76173: Spider-Man and Ghost Rider vs. Carnage is one of the cheapest Marvel Spider-Man sets you can buy. But we feel like it offers much better value for money than most. Not only do you get a decently-sized, well-made vehicle, you also get three excellent minifigures. What more could you want?

LEGO Spider-Man and Ghost Rider vs. Carnage has no numbered bags. Rather, you have one large bag and three small bags, all of which need to be opened at the same time. One of the small bags contains only orange ‘flame’ details for the car, the use of which are optional. Opening all at once isn’t much a problem though, since there’s only 212 pieces altogether.

As you’d expect from a £17.99 build, LEGO 76173 Spider-Man and Ghost Rider vs. Carnage is a small and therefore rather simple build. Aside from putting the three minifigures together, you’ll be putting together Ghost Rider’s muscle-like car.

There’s nothing too tricky to put together, but there are some nice, small details. There’s of course room for Ghost Rider to sit behind the wheel, and the bonnet of the car comes equipped with missiles which can be fired at his adversaries. In this case, Carnage.

As mentioned above, the orange ‘flame’ detailing is optional. You can opt for a more ordinary-looking car without the details if you wish, but we prefer the flames. It gives the impression of speed and fire, and that’s exactly what you need with Ghost Rider’s car!

The minifigures in the set are definitely worth mentioning. It’s rare to get three ‘named’ minifigures in a set of this price bracket. Typically, we’d expect to get one, two tops, with a ‘grunt’ or ‘henchman’ to make up the numbers. But the three minifigs here are all excellent, all with printed detailing to make them stand out. Interestingly, Ghost Rider’s hair is fused to his head; it’s not two separate pieces as you’d normally expect.

Being a Marvel Spider-Man set, LEGO 76173: Spider-Man and Ghost Rider vs. Carnage is without a doubt meant to be a play set. The car is the perfect size for smaller hands to grip, and the chunkier wheels means it rolls along smooth surfaces pleasantly. The flame detailing adds a fun touch, and the working missiles on the front of the car makes it perfect for staging fights between the three included minifigures.

That said, the vehicle itself is eye-catching enough that it works as a small display piece, too, especially if you’re a fan of LEGO vehicles. In fact, we’ve placed ours on our shelving unit next to the Technic Dom’s Dodge Charger. Both cars have a similar shape, colour and style – and both with weaponry at the front, they make a perfect pair.

Without a doubt, LEGO Spider-Man and Ghost Rider vs. Carnage is worth its £17.99 asking price. Honestly, we’d expect to pay around that price for a LEGO City car with as much detail as this one. The fact you also get three premium minifigures included with that – typically priced at around £4 each – makes this set an absolute steal.

Even if you’re not a huge Spider-Man or Marvel fan, we’d wager the set is worth it for the vehicle alone. But if you do love Marvel, then purchasing LEGO 76173: Spider-Man and Ghost Rider vs. Carnage is a no-brainer. We love it. 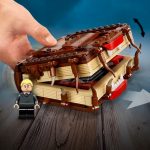 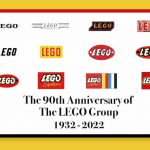