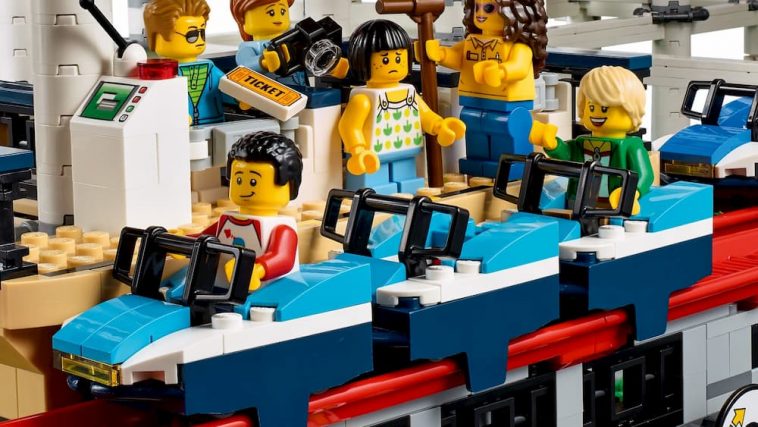 I was almost dreading putting together the LEGO Creator Expert 10261 Roller Coaster. Not because it didn’t look really cool – because it looks fantastic – but because of the sheer size of it. It’s absolutely huge. That’s still true. But after finishing building it, and playing with the thing, I absolutely love it. Sure, it’s 50cm tall and nearly a metre wide, but if you have space to display it, it’s utterly delightful. The LEGO Roller Coaster might just be the most fun set I’ve built to date.

There are 11 sets of bags altogether for the Roller Coaster. Bags one to five make up the first half of the build, and six to eleven are the second half. Each half has its own instruction book, which makes it an ideal model to build in a pair. The second half is a little bigger than the first though. So if you’re tackling this set with someone else, have the faster builder working on part two!

The first stage of each half of the build is concerned with laying the foundations. So very early on, you have some idea of the size of the footprint of this thing. Spoilers: it’s a big footprint. You’ll need the entirety of your four-person dining room table to build it.

The footprint you can see above is about two-fifths of the final build. The second half is quite a bit bigger, and houses a lot more of the nifty details. But even bag one had three minifigures, a very cool candy floss stand, a park map, a bench and a super-funky LEGO tree.

Annoyingly, the LEGO Roller Coaster contains its fair share of those dreaded stickers. Unfortunately there are no unique printed bricks; instead, there are over a dozen stickers that make up various signage across the park. It’s always a little disappointing, but it’s pretty much to be expected in most LEGO sets now.

As you can tell from just a quick glance, a lot of the build is simply putting together the white beams and supports. But even those manage not to be too repetitive and laborious; most of them are slightly different in some ways. It’s clever how they all work together, too. A structure that’s 50cm tall and supported just by thin piles of bricks doesn’t sound so sturdy, but the way that support stands have been interlaced between the poles offers a surprising amount of rigidity. It’s not something you’ll want to pick up and move around often, but it’s not so flimsy that you’re likely to break something off by being a little too heavy-handed.

The main trouble with laying the supports is that the instructions aren’t always the easiest to follow. With nearly two dozen white pillars jutting out of the base, it can be hard to differentiate one from another. There were a couple of instances where I’d placed something in the wrong place, but it’s usually not too long before you realise you’ve gone wrong somewhere, and thankfully nothing was too troublesome to fix.

Laying the track in the right place was also a little tricky. Again, it was hard to tell which of the twenty-odd white posts you needed to connect with. And with five or six types of track piece, some with only very slightly different undulations, you have to be careful to make sure you’re using the right one. But, providing you get everything in the right place, it’s exciting to begin to see the whole thing come together.

One of my favourite parts of the build is the “Roller Coaster” sign that attaches to the side of the coaster. Just look at it! It’s an incredibly simple thing – using bricks to spell out letters – but the execution of it is much more intelligent and well thought-out. It’s the small touches like this that truly make you realise just how much care and effort goes into creating a Lego set, especially one of this size. Each letter is its own structure that incorporates a clip, and each then attaches to the fence-like structure at the back to keep them all together. So simple, but so clever.

This is a hard one to call for the LEGO Roller Coaster. £300 for a playset is a ridiculous sum of money – but this is a set that’s just dying to be interacted with.

The shining glory of the Roller Coaster has to be the mechanisms in place that make the coaster work. Once fully constructed, most of the inner workings are hidden under the queue booth, but it’s here that you’ll find the manual controls. Along with a brake that can be released by a lever, there are two handles. One gets the carriage moving from the brake position, and another operates the winch that moves the carriages up the tall climb. Once the carriage is in motion, you can deactivate the brake and the carriage will keep travelling, so you’ll only need to operate the winch.

It’s incredibly clever how the whole thing works, the winch and chain resembling a real-life rollercoaster. The chain is a pain to put together – over 200 tiny links that need joining manually. But turning the crank and seeing the Roller Coaster go round and round is simply pure joy, no matter what age you are. It can be upgraded with power functions too, to make the coaster move around by itself.

The little details of the set are worth a mention, too. Yes, the focal point is the giant coaster, but the small touches really help to bring it to life. There’s the little seagull that sits on top of the queue booth, for instance, and the incredible expressions on the minifigs’ faces (many of which are double-sided) make for hilarious snapshots. The little booths are brilliant, too. Aside from the candy floss stand, there’s a ticket and photo booth, and a juice bar.

The footprint of the coaster doesn’t allow for much space for minifig play though, but these little details surely make younger builders want to play around with it.

But even to look at, the LEGO Roller Coaster is an impressive sight. It sits proudly on my sideboard in the dining room, and it immediately attracts the attention of anyone who comes to visit.

£300 is a lot of money, but the LEGO Roller Coaster is a heck of a striking set. It might not look as intricately detailed as, say, a Modular building set, but there’s a lot of care and effort that’s gone into its design. It’s especially worth it if you have other fairground sets, like the ferris wheel or merry-go-round. You’ll just need a lot of space to have them all on display.

If you ever see this set on discount, jump on it. You won’t regret it. Even at full price, it’s hard not to fall in love with. 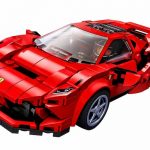