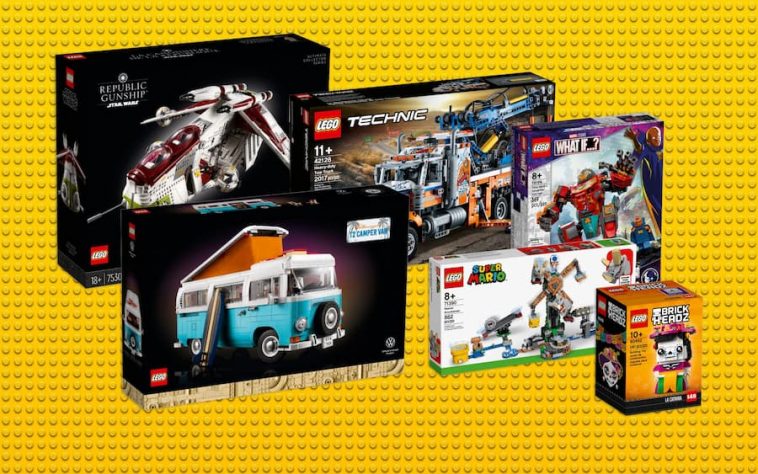 There’s an unusually large drop of LEGO sets coming on 1st August – over 30 new sets, if our calculations are correct. Needless to say, then, it’s going to be an expensive day for the ardent collectors among us.

If you’re wondering what sets you should be picking up on the 1st August and beyond, we’ve rounded up everything that will be available in the UK on that day. We’ve arranged everything into their subcategories, so just jump through to the sections that interest you most:

The Republic Gunship is the next Ultimate Collector’s Series LEGO Star Wars set. As you’d expect, then, it’s absolutely huge – it measures in at 68cm long and 74cm wide. Phew. It’s based on a ship from Star Wars: The Clone Wars, and will undoubtedly be a must-have for many collectors.

The second-biggest of the new LEGO Star Wars sets launching on 1st August, the Imperial Light Cruiser was revealed during LEGO CON. It’s a fairly sizeable ship at 58cm long. There’s a nice amount of detail packed in: working blasters, two mini TIE Fighters tucked away, and a full interior that can be revealed when you lift up the front.

Announced earlier this year, the Attack Shuttle is from Star Wars’ new series, The Bad Batch. It’s always nice to see a brand new ship come to life. This one has a lot of details we love: wings that can move upwards or outwards; an interior cabin, working shooters, and storage for all your weapons. It also comes with two landspeeders. Read more about it by clicking here.

LEGO Darth Vader Meditation Chamber was revealed earlier this month. It’s a display set aimed at adults that looks to be in the same range as the recent wave of helmets and droids that we’ve seen. It opens and closes, enveloping Darth Vader within its chamber. You can read more about the set here.

Based on the hit series The Mandalorian, here’s a great-looking LEGO Star Wars ship that we’ve never seen before. The blue hues on the wings make a change from the usual wash of grey we’ve become used to. And the minifigures included – Bo-Katan Kryze, Gar Saxon and a Mandalorian Loyalist – all look excellent.

“Boba Fett’s Starship”? That looks a lot like the Slave I, you might think. And you wouldn’t be wrong – but this familiar Star Wars craft has a new name. We suppose it at least stops confusion with the previous models. This one’s a bit smaller than previous Slave I models we’ve seen, but it packs in a lot of features. We particularly like the fact it has a built-in stand which allows the ship to be displayed upright.

Another new ship to the LEGO Star Wars range, the Imperial Armored Marauder might be on the cheaper side of things, but it still packs in plenty of features. It has working turrets, a cockpit to fit a minifigure in, an internal cabin and a lookout point.

This tiny set will make a nice addition to any LEGO Star Wars displays, but it’s the minifigures that are the real attraction, we think. It comes with Ahsoka Tano and Darth Maul.

LEGO 76177 Battle at the Ancient Village

We love a good LEGO dragon. This one’s particularly striking with its red and white design, and we like how it comes with a water base, perfect for displaying.

Here’s another scene from Shang-Chi and the Legend of the Ten Rings. It’s a vehicle chase, complete with a yellow car, two motorbikes and some sort of cannon.

Tony Stark loves a good Iron Man mech. This one is from the upcoming Marvel anthology series, What If…?. The super-cool thing about this mech is that it can be rebuilt into a car – almost like a Transformer.

This isn’t the type of set you’d associate with LEGO Marvel, but we love it. It’s ‘Bro Thor’s bachelor pad, complete with pizza boxes, a TV and general untidiness. It’s completely different from any Marvel set so far, and for us that makes it a day one purchase.

Here’s another one from the upcoming What If…? series. If you like mech builds, this one is for you. There’s room for a minifigure to sit and ‘pilot’ the mech, which can be posed and moved in a variety of ways.

If you want to get the Luigi interactive figure, this set is the only way to get him. It also comes with a buildable pink Yoshi (aww!) and Boom Boom. You can read more detail about this set by clicking here.

Leaked last week, LEGO has now officially confirmed Bowser’s Airship. It’s the biggest of the new expansion sets, and with a ship that expands and contracts, it looks to be an excellent playset. Read more about it here.

This set adds a tall tower with a brick-built Boss Sumo Bro sat at the top. It’s perfect for toppling and causing mayhem!

This expansion set adds a cloud-filled sky section to any LEGO Super Mario play course. It comes with a buildable Lakitu, Bullet Bill and Fuzzy.

Another sizeable set, this one adds a fun wheel of rotating platforms to expand your LEGO Super Mario playset with. It comes with two buildable Reznors, Blue Toad, a Grrrol and a special pipe which leads to a speedrun challenge.

Just how cute is Frog Mario? This outfit will allow Mario or Luigi to dress as a frog and show new interactions.

Perhaps there’s only one thing cuter than a Frog Mario or Luigi, and that’s a Bee Mario or Luigi. With this power-up suit, your Mario/Luigi figure will fly and buzz!

This series of 10 blind bags contains a mixture of new Super Mario characters and items to add to your playset. Find more information about them here.

If you were a fan of the now-retired LEGO Creator Expert Volkswagen T1 Camper Van, then you’ll probably be very interested in the T2. This one is bigger and packs in more detail – plus we love the new blue colour. This is definitely one of the highlights of the 1st August LEGO drop. Read more about the set here.

This is a pricey beast, but that’s because it packs in a Bluetooth-controller smart hub, three large motors and one medium motor. And what do all those motors do? Well, they make the truck move, of course. Using your smartphone to control it, you’ll be able to drive and steer the truck, its working suspension and 4-wheel drive allowing it to tackle rougher terrain. It’s also the first Technic model to have differential locking.

This Heavy-Duty Tow Truck is huge; it measures 58cm in length, is 22cm high and 14cm wide. There are no electronic power functions here, but pneumatic functions have been used to great effect. There’s an extending lifting boom, a lifting crane boom and an extending crane boom. That’s on top of a rotation function on the crane, a working winch and a lifting axle.

Although LEGO Seinfeld has been available to buy for a short while for VIP members, it officially launches on 1st August. Like the Friends sets that came before it, this is a miniature replica of a studio set, complete with lights and a cutaway apartment. If you’re a Seinfeld fan, it’s surely a must-have. Read more about the set here.

Admittedly, there’s seemingly not too much to this set for its RRP of £44.99. But the horse figures are something of a rarity, and the two of them in this set are rather cute. There’s also a small stable build, complete with a golden horseshoe logo, and a turret-style detail. It’ll match any Disney Princess castle outfit rather nicely.

The LEGO Disney Princess range has had a few of these folding books before, but this one stands out with its golden spine. The four micro-dolls are particularly cute too, representing four popular Disney Princesses. There’s a lot going on, including a pop-up castle, a bridge, and even some additional characters, like Beauty and the Beast‘s Lumiere. Once children are done playing, it will all fold neatly back into the book.

1st August is a good day for LEGO BrickHeadz fans – four new sets are launching. If you’ve already got the budgies, then the Cockatiel pair are pretty similar. They’re different colours, though, and we love their head feathers.

If you have the Shorthair Cats, the shape of the Ginger Tabby and Kitten will be very familiar. But as cat lovers – with a fondness for ginger cats – we think we prefer this set. A nice touch if the tabby’s scarf; it reminds us of A Streetcat Named Bob. Aww.

We’re not sure if these hamsters do actually look like hamsters, but they’re adorable nonetheless. Just look at their little pink feet and pink cake-slice noses! A-dorable.

La Catrina is here to celebrate Día de los Muertos – that is, the Mexican Day of the Dead festival. She’s dressed in a Traditional Mexican outfit with a painted skull face. It might only be small, but it’s one of our favourites of all the new LEGO sets launching on 1st August.

These LEGO Dots bag tags are the ultimate in cute accessories. Made up of a plastic cube that can be decorated with Dots pieces, they’re ideal for young children to express their creativity. This Unicorn is all about bright colours and rainbows.

Okay, so we might not have guessed that this was supposed to be a dragon without being told, but it’s still super-cute. The great thing about Dots is that they come with a range of unique printed bricks, and this set is no different – just look at that fire-breathing mouth!

1st August might be a bit early for Halloween celebrations, but LEGO doesn’t care. This Halloween Owl is of a similar scale to this year’s Easter Rabbit set. It comes on a base, complete with pumpkins for a true Halloween feel. 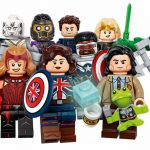 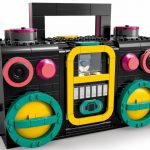